After 25 years of success and a keen nose to sniff out talent, The Frog and Bucket continues its School of Comedy with Comedy Course tutor, Dave Williams.  Dave has been a professional comedian since 1998.  He is a regular MC and act at the Frog, Comedy Store and at gigs throughout the UK. He has gigged worldwide and performed 3 solo shows at the Edinburgh Fringe. Before going full-time as a comic, Dave ran training courses on a wide range of subjects including presentation skills.

Sessions will take place on Saturday afternoons 12:30pm-2:30pm for 8 consecutive weeks ending with a showcase for the students to show off all that they have learnt. The cost of the course is £300.

Click here to book one of our upcoming courses.

Eight 2 hour training sessions in small groups. Access to any of our shows during the eight weeks plus a guest. A showcase performance following the course. Graduation certificate. Ongoing discounted entry to the Frog.

We are limiting the number of delegates per course so book quickly to avoid disappointment. Once the course is fully booked we will release the next course dates. You are welcome to pay the final balance in instalments as and when you want prior to the first course date.

‘The frog and bucket comedy course is a must for those wanting to do stand up comedy. Presented by Dave Williams, an absolute master of his art, and delivered in a friendly, supportive environment, this course is without a doubt one of the best things I’ve ever done.’

‘After years of being a frustrated, aspiring comedian I took the Frog and Bucket Comedy Course and now I’m a frustrated, actual comedian. If you’ve ever thought that you might want to try comedy then the course is a fantastic peek behind the curtain and it has started me and others on a path that has led to fulfilling dreams of performing on some of the best comedy stages in the country.’

‘I loved everything about the course. Friendly atmosphere and plenty of information and support. I met great people and would recommend the course to anyone.’

‘Amazing experience and a wonderful way to get in to stand up comedy and meet new people.’

‘ It was great. Defo something that people should try and I will be recommending this to people! Dave was great and the final show was so much fun (although terrifying!) Anyone that is thinking about it should be brave and just go for it.’ 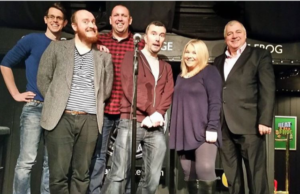